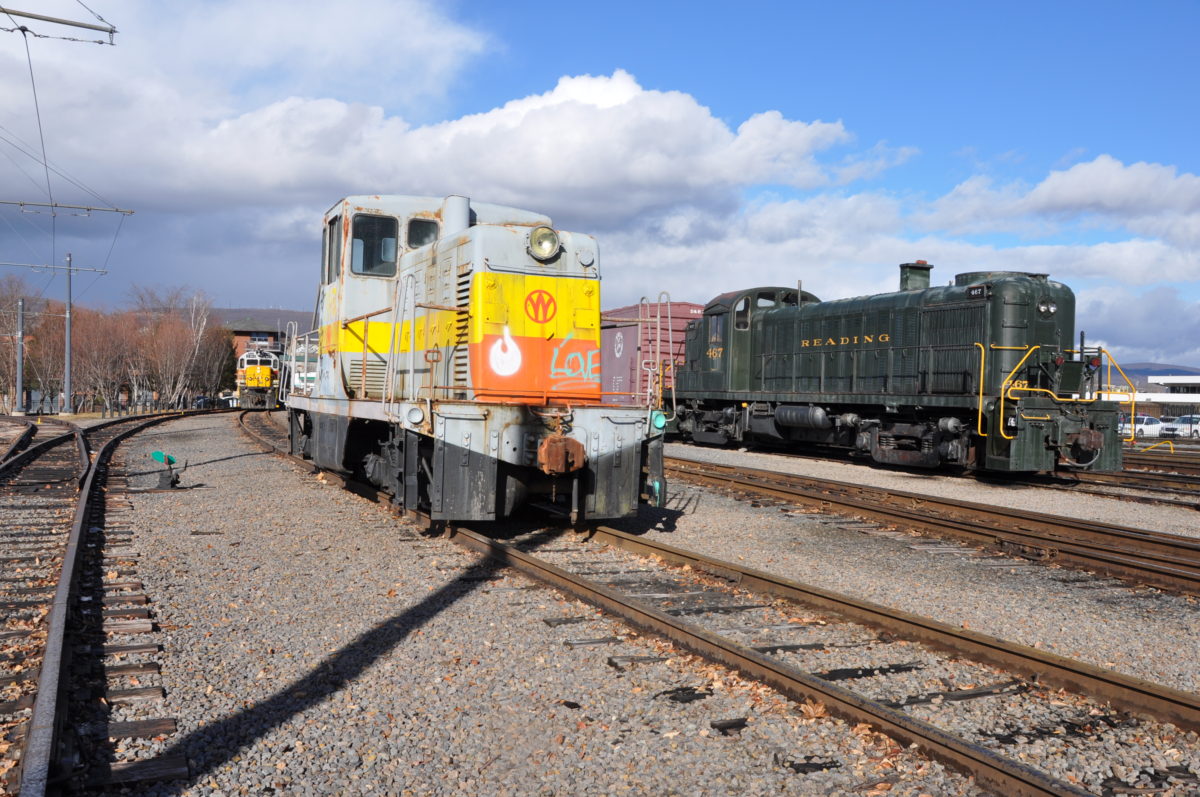 The O&W Railway Historical Society ended 2016 on a very positive note. After a number of years of letter writing, phone calls and frustrating delays, an inspection was made and negotiations were finalized to purchase the O&W 105.

The 105 an original O&W 44 tonner, has seen many owners since the O&W sold it. The last owner, Joe Petaccio, a Society member and owner of the Southern Railway of New Jersey added it to his locomotive roster. Sadly Mr. Petaccio passed away unexpectedly a few years ago and the locomotive was tied up in his estate.  As some of his equipment was being scrapped to pay bills, it was feared that the 105 would meet the scrappers’ torch. Fortunately that did not happen and last fall it was purchased by the O&W Railway Historical Society.

A cursory inspection of the locomotive determined that it was in fairly good condition. With a little TLC and a new paint job it would be suitable for display. Seeing that, we reached out to the Steamtown National Historic Site, explaining the relevance of the 44 tonner as a cost savings effort to keep the O&W alive. Steamtown accepted our explanation and arranged to allow us to display the locomotive using the Park Service Permit process. Once the permit was processed and proper insurance was in hand we could bring the 105 closer to home rails. (The Scranton Branch terminated less than a mile from the Steamtown site.)

Trucking companies capable of moving a 44 ton locomotive were investigated and it was decided to hire Daily Express, as they have a long time experience with moving railroad equipment. A date was set and on December 27th the locomotive was loaded at Winslow Jct. NJ and transported just shy of the NJ / PA State Line. On the following day its journey continued and it arrived in South Scranton before noon. Since it could not go directly to Steamtown due to height restrictions, it was necessary to arrange for an unloading location site with the Delaware Lackawanna Railroad. On January 4th the DL Local crew with two DL locomotives coupled the 105 to about 10 freight cars and brought it to Steamtown. It was quite a sight to see it in freight service even if it was under tow.

Now that the 105 is at Steamtown it will be moved to a location suitable for inspection and lite work. The next step is to have a full inspection for any defects both mechanical and FRA. There will also be an evaluation of both original Caterpillar engines to evaluate the possibility of returning the locomotive to operating condition. It is anticipated that as soon as the weather improves the entire locomotive will be power washed and an attempt will be made to remove the graffiti as well as touch up the paint.

Once both inspections and evaluations are complete it will be determined what steps will take place next and ultimately the locomotive will be entirely repainted. We have high hope that the locomotive can return to full operation as it last operated about 10 years ago. It will be an asset to Steamtown as it can be used to switch the shops and yard as well as handle the “Scranton Limited” shuttle on occasion.

Anyone wishing to volunteer to physically work on the 105 must become a “Volunteer In Parks” (VIP) member. They can e-mail the the Volunteer Application (see Link Below) to NYOWfan@msn.com or mail it to the attention of: Norman J. Barrett, 609 Johnson St., Dickson City PA 18519-1610.
Norm will deliver applications to Steamtown for their approval.

A BIG THANK YOU to the 30+ “105 Team” members that have made a total of $ 4,387.00 in donations so far.  It is a great start on raising the funds necessary to restore and maintain the 105 for years to come. The O&W Railway Society members can be proud that they have saved one of only three existing O&W locomotives and that it will be on display at one of Americas National Parks where all can visit and see.

We also have to say THANK YOU to Delaware Lackawanna Railroad Superintendent Lorie Ransom and Trainmaster Peter Nicholas for their assistance in moving the 105 to Steamtown.

To contribute to the 105 Project please send your tax deductible donation to: